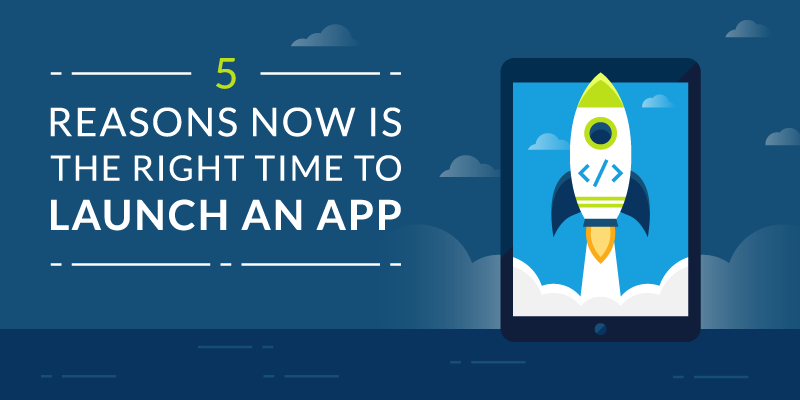 There are always a lot of questions about whether it is the right time to launch an app. Think about the app market and the number of new entries on any given day.

At the onset, when you think about the question, you probably think to release it when the app is ready. This may not be the right approach though, as the market also has to be in a position to consume the app in big enough numbers to make it worth your while. Considering that huge tech companies like Facebook, Twitter, and Airbnb all started during a recession, there are definitely opportunities during times when most businesses are conservative.

Let us take a closer look at many reasons why now is the right time to launch an app.

The Appetite for the Digital Age is Massive

We are in the digital age more than ever before. The appetite to do everything digital is there. Think about all that is happening remotely now through various apps. Folks are working completely remote at this point, school is being done remotely in many spots, and communication is more remote than ever. When you take all this into account, the end result is that there is a real desire to embrace the digital age.

It was not too long ago that folks were a bit cautious about embracing everything digital. Many still wanted to go to the bank to deposit checks versus doing it mobile. Mobile payments on services such as Venmo were scary to many. Now, all that is out the window as folks want to do all this digitally. Now is the right time to launch an app because never has there been more of a desire to do everything digital than now.

The Talent Pool is Large for Development

One of the biggest pieces of the equation when it comes to launching an app is the talent pool and overall app development. You can have the best idea in the world for an app, but you need developers that can take that idea and turn into something functional. Developers, architects, engineers, and more are accessible, available, and willing to create.

There Are Plenty of Outlets to Make it Available

It was not too long ago that it was quite difficult to build an app and get it out to the masses in a distribution platform. Now, things are much simpler. You have the Apple App Store, the Google Play store on Android devices, as well as plenty of other outlets. With all these distribution platforms, you can combine a social media presence with a launch on one of the many application stores to make your app available and known to the fans you try to attract.

With the distribution outlets available, marketing is the other piece of the equation to think about. Social media is making it easier than ever before to create hype around an app without breaking the marketing bank. You do not need a big advertising budget to post on social media and begin to get a following going. The combination of easy distribution channels and social media making marketing less expensive makes it an ideal time to launch an app.

Healthy economies have a tendency to produce an immense amount of startups. This is due to all the financing and VC options that are plentiful in an upmarket. Well funded startups pose a serious threat to bootstrappers since they can outspend during the development phase to get a product into the market faster and more cash on hand for advertising campaigns. In the game of tech startups, the first to market share dominance is bound to win the race.

In a down economy, those funding options are scarce at best leaving the scrappy bootstrapped startups with an advantage. Whatever funding may be secured won’t be enough to outpace the competition. Ultimately this means that less competition will enter the market during these difficult times.

Just like investors will pull back on funding startups during a recession, so does the rest of the market. By being a bootstrapped startup you have the ability to provide the same or better service at a lower cost than your competition who may have significantly more overhead. This is the perfect time to steal market share by undercutting the competition.

Airbnb is a great example of a tech company that started during the worst recession that the US has ever seen. Their plan was simple. Provide hosts, who are feeling the economic impact of a down economy, a way to rent out a portion of their apartment to earn some extra cash. On the flip side, travelers were able to save money on accommodations when compared to overpriced hotel rooms in the city.

The fact is that launching an app right now makes a lot of sense. You can build it thanks in large part to the amazing talent pool that exists in the development market and the decrease in overall app development costs. You can also easily distribute it thanks to the many outlets accessible to the masses. Marketing can be made possible on a tight budget thanks to social media. On top of all that, there is a huge desire for consumption of all things digital by the general population. With everyone wanting to do everything digitally, getting your app out there could help to pave the way for new life habits for individuals. Showing new ways to do things digitally can further bring us into that digital utopia we are on the path towards.

Author Bio: Matt Shealy is the President of ChamberofCommerce.com. Chamber specializes in helping small businesses grow their business on the web while facilitating the connectivity between local businesses and more than 7,000 Chambers of Commerce worldwide.

5 Reasons Now is the Right Time to Launch an App