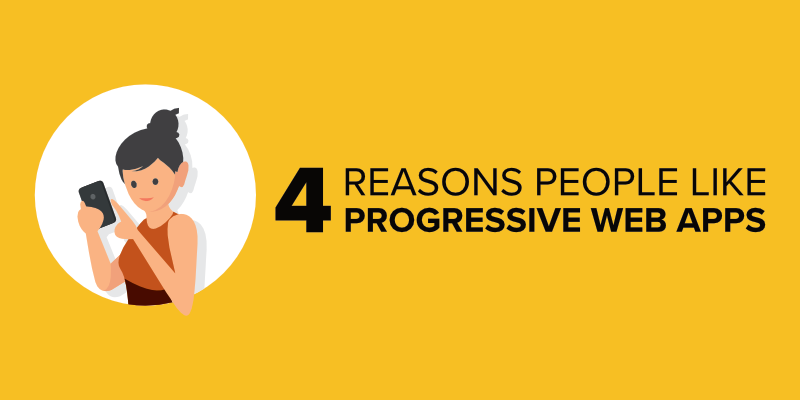 The web is a place of never-ending change. Just when you think you’re hopping on board one trend, another comes whizzing by. That’s what makes design or marketing on the web such interesting jobs, because you always have to be on the lookout for the next big thing.

And what is the next big thing? Why, Progressive Web Apps of course! The changes brought by responsive web design have almost fully saturated through the entirety of the modern web. And now Progressive Web Apps- which offer the same functionality and feel as a native mobile app, but are accessed through the internet like other sites- are next up to change what we do and how we do it.

So, without further ado, here are four reasons why web apps have been a startling success.

The first reason, and probably the most important, is that modern society doesn’t have a lot of time to hang around. We all seem a little more impatient than we used to be! It’s probably because we’re so used to being able to access whatever we want, whenever we want, be it entertainment, food or leisure activities (see: Tinder). That’s why we’ve seen such an explosion in smartphone use, and that’s no bad thing.

It’s also why native apps proved so popular. They let users get the best out of their smartphone, in a way that’s smart, responsive and lightning fast. In fact, the only thing that holds native apps back is their occasional need to sync with a server! Mobile web browsing, by comparison, is even slower. Keeping customers trying to access your site waiting is throwing conversions down the drain… And that’s where PWAs come in.

PWAs are designed to provide the same responsiveness as a native app. They aren’t just fast- they load instantly, even if you have a patchy connection (more on that later). This means that fewer and fewer potential customers are going to give up on accessing your site, which in turn, means a far smoother ride from potential customer to conversion.

We tend to stick with what’s familiar

It’s a well-known fact that we stick with what we know. But because every business from small to large has its own identity, every website is different. The internet has done nothing but change over the last decade, and the way that sites are laid out and information presented can differ wildly from site to site. Colour schemes, styles, design, mobile-specific layouts are different on each site you visit. We aren’t calling for a uniform web where all sites look the same, by the way, we’re just pointing out the facts!

By contrast, apps are broadly similar. There are best design practices that almost all app makers adhere to, and the menus and layouts are generally the same too. Bear in mind, that’s no bad thing: apps these days look amazing, but are always kitted out with familiar features which make them easy to navigate and easy to use. This has grown into apps having their own distinctive style, which we implicitly associate with smartphone use.

PWAs give users that same app like experience, but without having to install an app! You can, of course, design your business’ PWA however you like. But PWAs generally break down the barriers of the web, and let users experience a clearly mobile-first experience, using the same kinds of menu and navigational features that you can find in an app.

PWAs aren’t just apps in disguise, however. They also address some of the problems that native apps face, and improve on them, meaning that they provide the best of both worlds. To understand how they do this, let’s take a look at one of the few reasons why apps are actually inconvenient: they require you to install them, maybe purchasing them first, through the app store.

When you think about it objectively, downloading an app isn’t the end of the world. It takes a couple of minutes at most. But think of it like this: if you’re browsing the web, either on mobile or PC, and a page takes over a minute to load… Who are we kidding- most people don’t last ten seconds! The ‘chore’ of purchasing and downloading an app is a major reason why potential customers are turned off, and turned away.

By contrast, PWAs are completely frictionless to use. They don’t need to be installed, nor are they pay-to-use. They’re accessed just like accessing any other website. And not only that, but with some JavaScript trickery, they work even when you don’t have any signal! Which brings us to our next point…

They work wherever you happen to be

One of the best things about apps is that, by and large, they work without needing an internet connection. That’s why apps are so much more popular than mobile web browsing, which does. And even if you do have a connection, maybe it’s not so stable- and so pages struggle to load- or your phone isn’t the most modern, so pages load too slowly to be useful.

PWAs take what’s great about apps, and make it available in the context of mobile web browsing. PWAs use a script called a service worker which, without getting into too much detail, allows users to load a cached version of the site even when they don’t have a stable internet connection. So not only do PWAs provide the feel of an app, but they can load immediately like one, too.