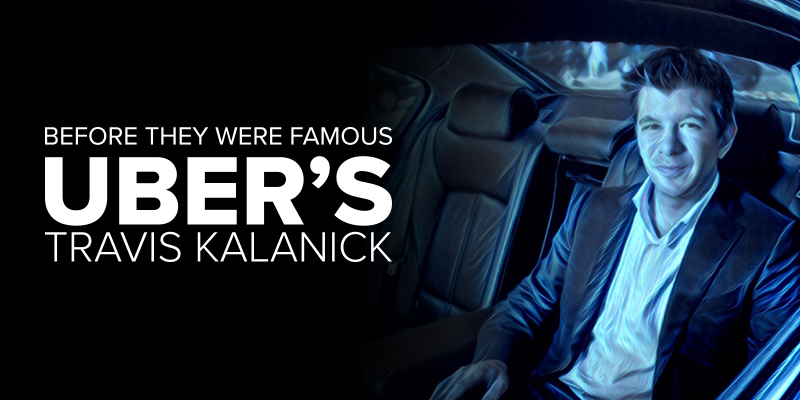 Uber Technologies Inc. was founded as UberCabs in March 2009 and is now more commonly known simply as Uber. Of the three original co-founders, only Garrett Camp and Travis Kalanick remain, with Oscar Salazar having amicably left in 2011, soon after Uber’s services and mobile app officially launched in San Francisco. Following an initial seed investment of $200,000, Uber has gone on to raise more than $6-billion, while revenue in 2015 topped $1.5-billion. And although it was recently reported that losses for 2016 could exceed $2-billion, Uber’s losses are growing slower than they used to, possibly the result of Uber exiting China.

But how did Travis Kalanick – the man most often associated with Uber – end up disrupting the taxi industry?

Travis was born in Los Angeles to a retail advertiser and a civil engineer. As a child he had similar fantastical career aspirations as any child; for Travis, this meant being a spy when he grew up. But the stubborn determination – and confidence – we still see in Travis today was revealed at a young age when he started selling Cutco knives door-to-door. Although he was not destined to be a door-to-door salesman, he did excel at it, and by the age of 18, Travis was launching his first business, New Way Academy. New Way Academy was an SAT-prep tutoring service aimed at helping students boost their SAT score, and a former classmate described Travis at the time as:

“an excellent storyteller but in a good sense. He can illustrate a lot of different things. He’s also driven and opportunistic, which can be good or bad.” 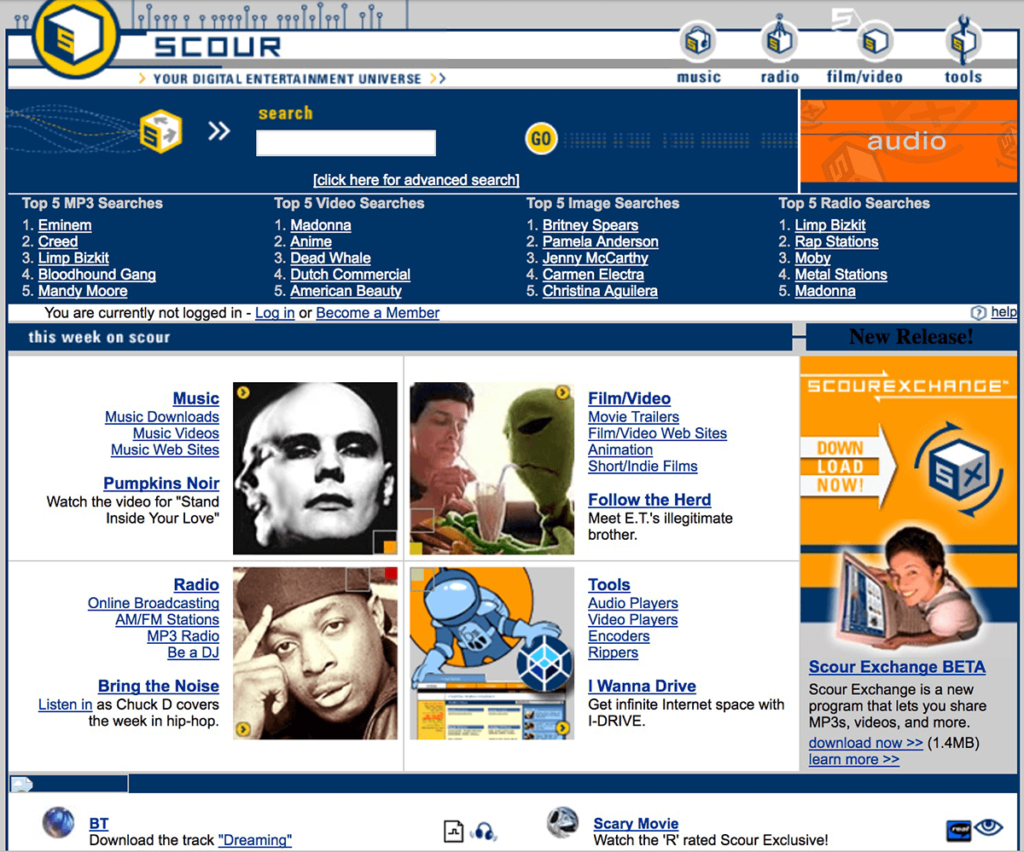 The WayBack Machine’s record of scour.com

Following high-school, Travis enrolled at UCLA to study computer engineering, and he met Michael Todd and Vince Busam through the college Computer Science Undergraduate Association. Michael and Vince were working on a side project that they – along with three other students – launched as Scour in late 1997, and Travis joined them as one of Scour’s first employees in 1998. This decision was probably not supported by his parents since it also involved him dropping out of college. Scour was one of the first publicly available peer-to-peer apps – predating Napster by 18-months – indexing publicly shared files that other users could then download.

Despite an investment from former superagent Michael Ovitz, Scour was not able to avoid copyright infringement lawsuits launched by the Motion Picture Association of America, the Recording Industry Association of America, and the National Music Publishers Association. The company filed for bankruptcy protection in 2000, and in 2001, along with Scour’s former engineering team, Travis started Red Swoosh – another peer-to-peer file sharing app, similar to Scour. 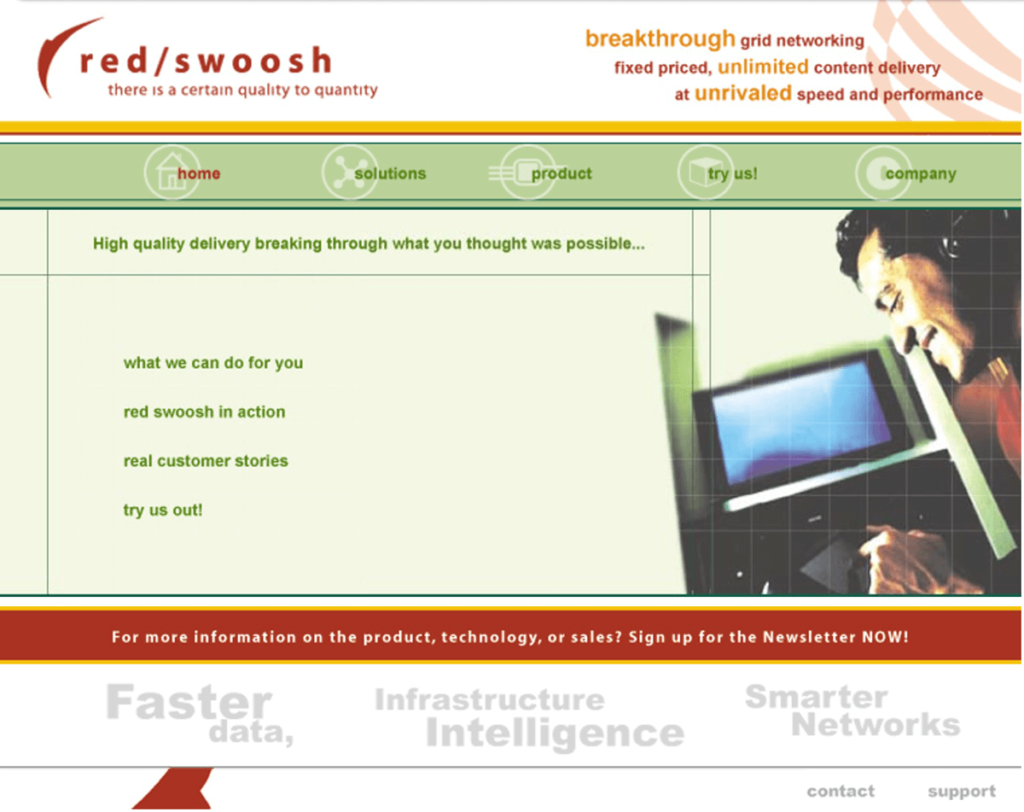 The WayBack Machine’s record of redswoosh.com

At the 2011 FailCon, Travis Kalanick spoke about his time at both Scour and Red Swoosh as a case-study of failure, dubbing himself the “non-luckiest entrepreneur of the year.” Akamai Technologies acquired Red Swoosh for $19-million in 2007, but that was in spite of the many missteps Travis and his co-founder made along the way. These included problems with the IRS, an acrimonious split from his co-founder, and even having to code himself after Google poached his last engineer. 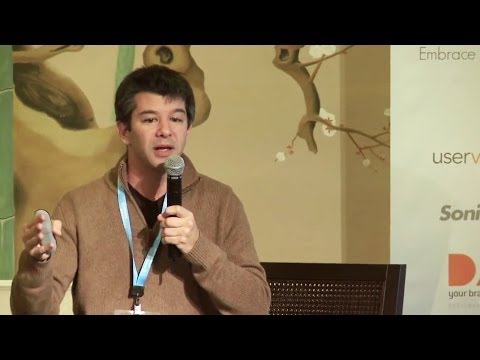 This talk again shows Travis Kalanick’s stubborn determination to achieve what at times seems impossible. During his time at Scour and Red Swoosh, Travis would face each new obstacle and resolutely refuse to concede defeat. And each time he would somehow find a way through, even if it meant eating ramen while living with his parents. A former Red Swoosh employee summed it best when he stated:

“[Travis Kalanick] would get up in the morning with nobody on his team. and he still made it in the end. It’s inspirational in a lot of ways that when things got tough and he was down to nothing, he still kept going.” 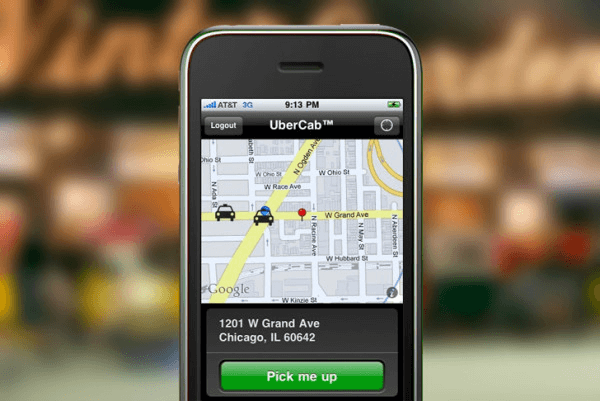 How did Uber start?

After 7-years of highs and lows, even when ending with a successful acquisition, most people – even committed app makers – would take a brief break before moving on. But not Travis, who in addition to continuing to work for Akamai, travelled extensively, and began investing in various startups and businesses. He eventually left Akamai in August 2008, and later that same year found himself at the LeWeb conference with Gary Vaynerchuck, Garrett Camp, and Melody McCloskey. Garrett spoke with Travis about an idea he had to cut the cost of black car services. Writing on the Uber blog in 2010, Travis describes it as:

Garrett’s big idea was cracking the horrible taxi problem in San Francisco — getting stranded on the streets of San Francisco is familiar territory for any San Franciscan. Garrett’s m.o. fits the Uber brand. He likes to roll in style, comfort and convenience. His over-the-top idea in Paris that winter started as a limo timeshare service. I think his original pitch had me and him splitting the costs of a driver, a Mercedes S Class, and a parking spot in a garage, so that I could use an iPhone app to get around San Francisco on-demand. Hilarious! Obviously things have changed quite a bit 😉

And indeed they have, not only at launch, but ever since. At launch – July 2010 – Uber was only available in San Francisco, and only for black car service. They began expanding nationally and internationally the next year, first to New York, and then to Paris; UberX, the service most Uber users are familiar with, did not launch until July 2012. By late 2016 Uber is available in more than 540 cities across 66 countries, and is constantly experimenting with more services such as: 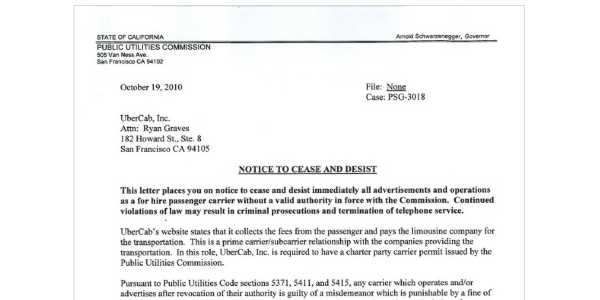 Uber has courted controversy from the beginning, receiving their first cease and desist notice just 3-months after launch, but the challenges Travis faced at both Scour and Red Swoosh had obviously prepared him for this. And unlike Scour and Red Swoosh, Uber has never had problems attracting investors, so Uber’s challenges are largely related to regulators and the transport industry, which is what one would expect with any disruptive innovation.

All app builders will encounter obstacles at some point, some more daunting than others, but successful app builders will – like Travis Kalanick – know when to switch to other projects, and when to stay and fight. It wouldn’t be fair to call Travis an app developer, since most of the initial development on the Uber app was done by Garrett Camp and Oscar Salazar, but he certainly is an app maker since, together with Garrett, he helped Uber become a verb – the ultimate in brand-name achievements – in under 8-years.

4 thoughts on “App Builders Before They Were Famous: Uber’s Travis Kalanick”