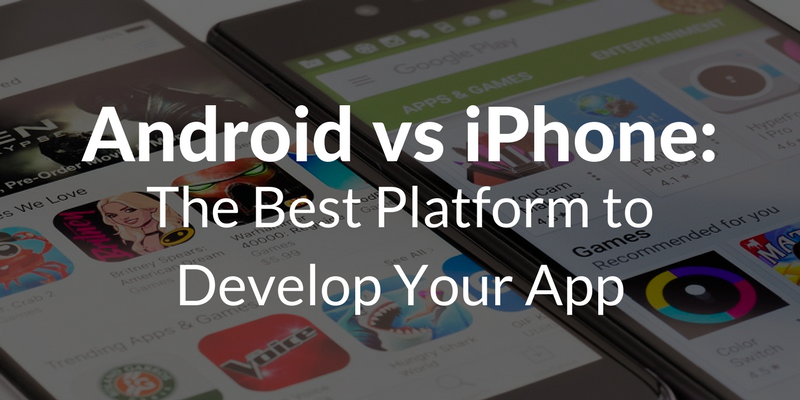 Chatter within the mobile development world today seems to be heavily focused on the Android vs iPhone debate; which of the two leading smartphone platforms to choose when developing your mobile app. This article aims to provide you with an insight into the ins and outs of today’s app market, comparing the benefits and drawbacks of each platform.

Why developers don’t care about Blackberry or Windows

Suit up and channel your inner Marty McFly as we travel through time. Our destination you ask? 2009… 1 Year after the opening of the first ever app store, courtesy of Apple, and a time when app stores across OS like Blackberry and even Nokia were still a promising concept.

Blackberry and Windows actually held more than a combined 5% of the smartphone market share – 19.9% for Blackberry and 8.7% for Windows Respectively as of Q4 2009 – and there wasn’t much choice going round for app developers. Blackberry was known more for its popularity in the business world and Windows, well windows only launched its marketplace in October of 2010.

This left Windows with one hell of a mountain to climb if they were ever going to be considered a top player in the app world, especially against the likes of Apple and Android, who seem to have always been the go-to for anyone remotely interested in apps

Meanwhile, Apple was still making ground in the app world and was by no means a clear-cut route to success for devs (140,000 available apps as of Jan 2010).

Nevertheless, it was time to say goodbye to the days of using your Samsung flip phones and LG Cookies to Bluetooth music to your friends.

Skip forward to the final quarter of 2016 where 81.7% of phones run on the Android Operating System. To put that into perspective, that equates to 352 million smartphones. 77 Million smartphones, or 17.9%, run on iOS. 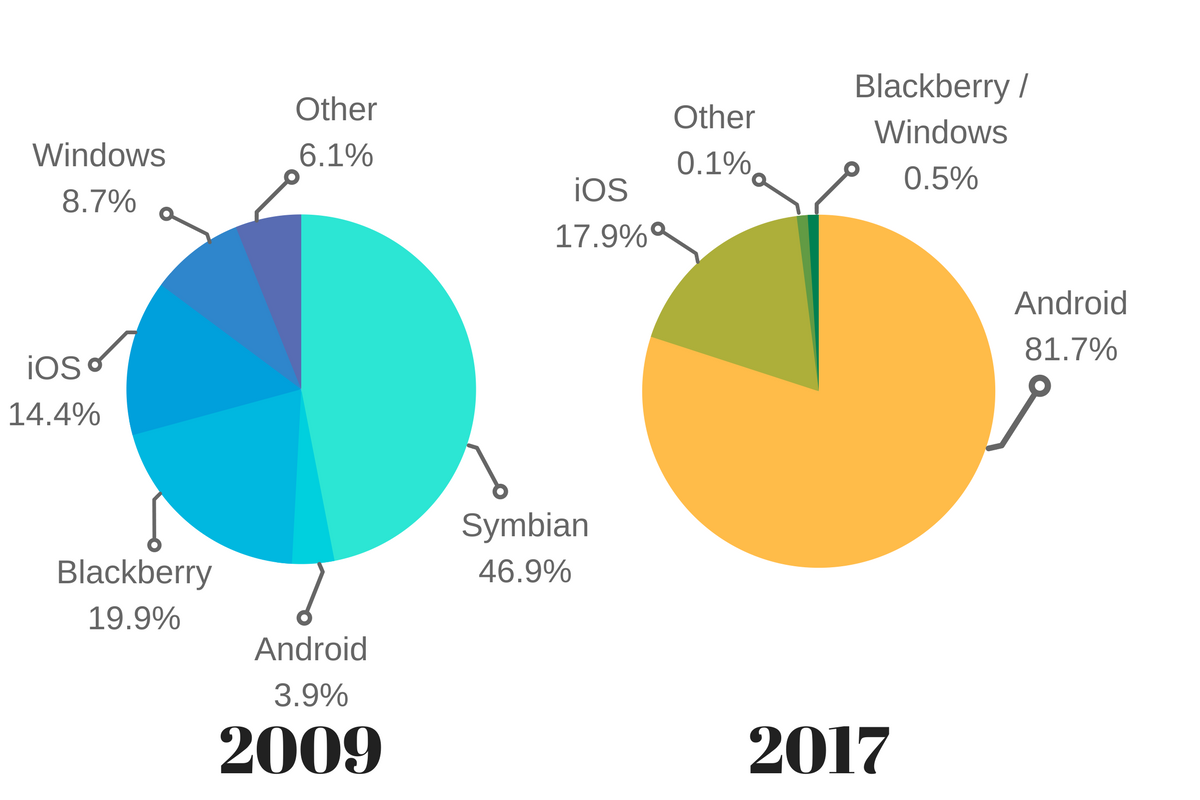 It is clear there has been a drastic shift in balance over the last 7 years. With this comes more choice than previously for app developers to make some hard earned cash from their creations.

Whilst this is true and it looks like Android’s market share is only going to increase year after year, Apple with its AppStore actually dominates in terms of revenue, which is where developers see their inflow come from.

This comes from the fact that iPhone users typically possess more spending power than Android users – hence why they spend up to $700 without question on each new iPhone release.

Despite having fewer apps currently available on its store, Apple has double the number of downloads compared to the Google Play Store. A whopping 130 billion downloads were recorded as of June 2016. Android only pulled in a total of 65 billion downloads, although that’s not a number to chuckle at by any means! 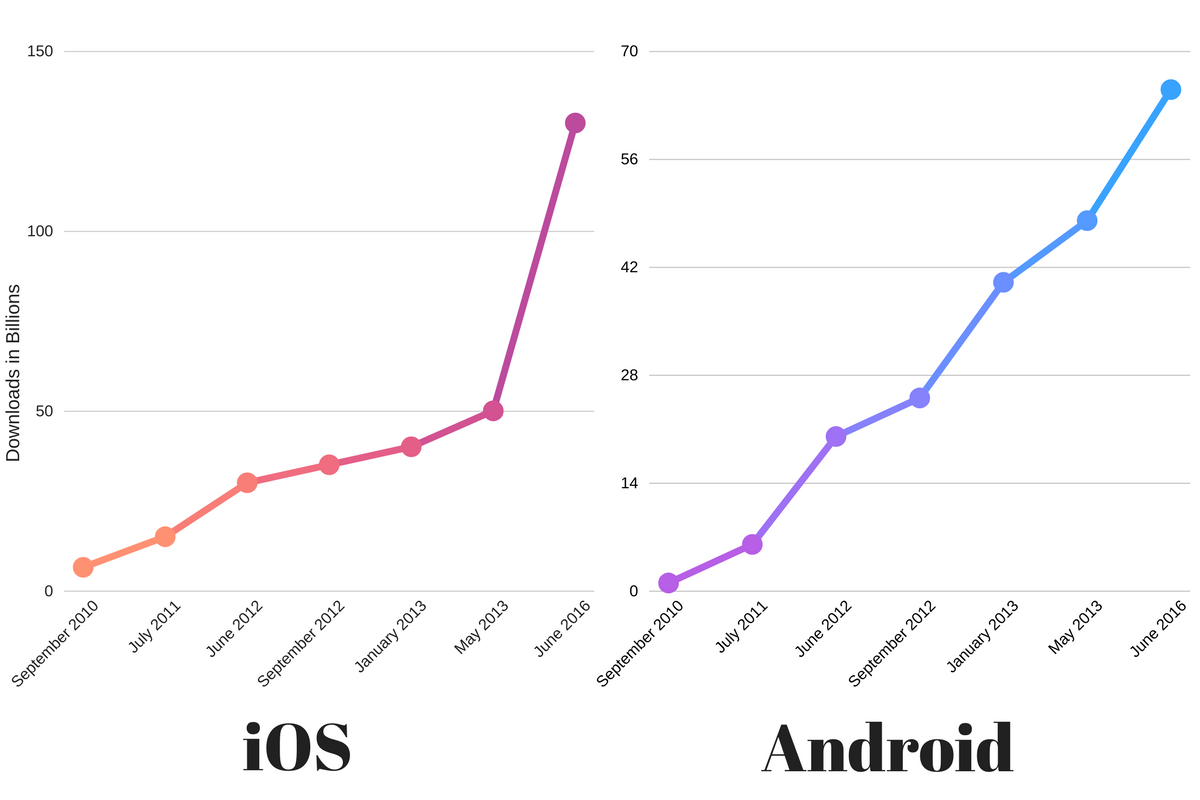 However, this gargantuan lead that Apple has (statistics shown above taken from global statistics portal, Statista) is slowly diminishing. Android has been posting impressive download numbers quarter over quarter recently and it’s closing the gap between the two gladiators.

The developer revenue gap is diminishing, and it’s in Android’s favor 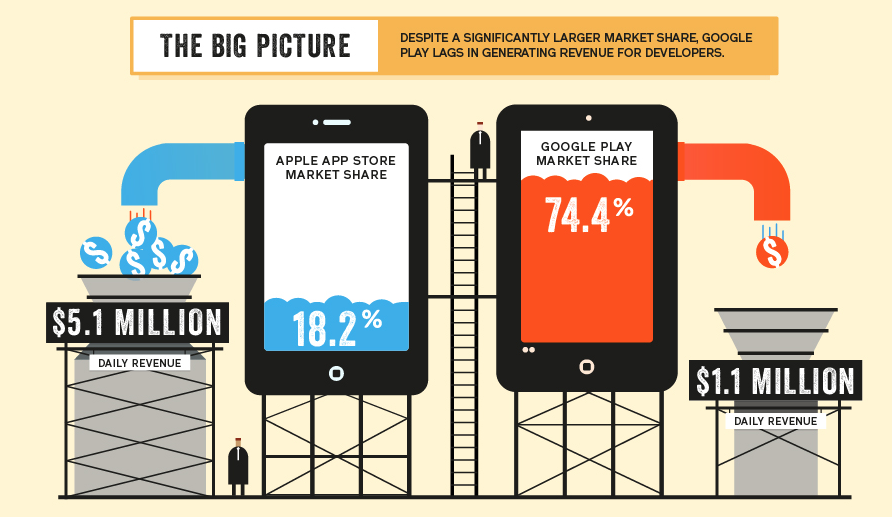 Last June, both Apple, and Google announced plans to change their revenue sharing system with their developers. Both companies have gone from a 70/30 split, developers:company, to an 85/15 split.

Keep in mind, Apple’s 85/15 split will only come into effect once a subscribed user has been paying for 12 months. Google’s split, on the other hand, is right from the get-go.

Consumer spending via the Google Play store is predicted to generate $78 billion by 2021, compared to that of the $60 billion from the AppStore. However, this statistic takes into account third party sites for Android devices like those in the emerging market of China (Huawei, Oppo, and Xiaomi). This is due to Google being banned from the country back in 2010. Individually, the Google Play store is set to generate $42 billion via consumer spending by 2021. $36 Billion will be generated by those third-party sites I just mentioned.

While yes, the primary focus for developing apps is to take advantage of the generous revenue sharing plans both Google and Apple offer, that’s not the case 100% of the time.

It’s not solely about how much money these tech giants are raking in year on year. Some of it does boil down to customer satisfaction. The general rule of thumb goes along the lines of; “a paying customer is a happy customer”.

With this in mind, 62% Of iPhone users are reported to be satisfied with their device. On the other end of the spectrum, only 48% of Android users can say the same – That’s a pretty big difference considering that’s less than half of all Android users!

You don’t want to be putting in all that hard work and effort, finally getting your app out to the public, only to see little to no return because consumers can’t even enjoy using their phone, let alone your app.

Apple still has the upper hand when it comes to customer satisfaction and revenue and it seems that choosing to focus on iOS devices currently reaps the most rewards, aka $$$. Although, Android is really making a splash and has a lot of upcoming changes in the works that may turn the tide of battle. Not to mention the firm chokehold they have on the current smartphone market share.

The Android vs iPhone battle is one for the ages and is certainly one I don’t see coming to an end anytime soon.

One thought on “Android vs iPhone: The Best Platform to Develop Your App”