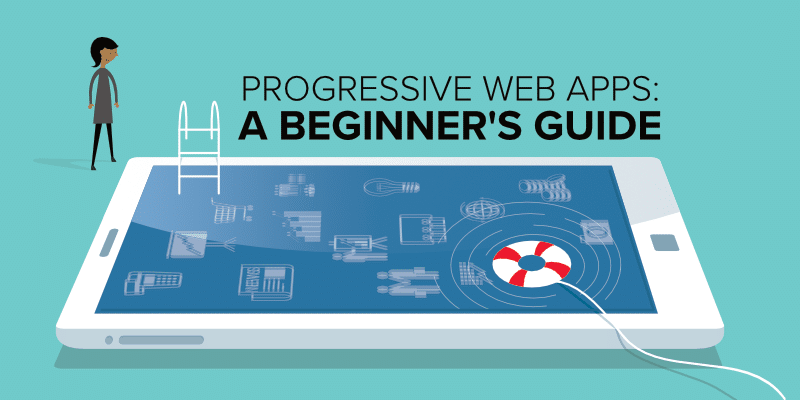 If you’ll forgive the cliché, when it comes to technology – as with life – the only constant is change. Websites today look very different – and are able to do a whole lot more – than the very first website published in 1990. Similarly, the mobile phones we now use are capable of so much more than that 17-year old cult favourite, the Nokia 3310. We no longer use browsers to only access web pages, but also web apps, while the apps we load on our mobile phones could be either native, or hybrid. And soon it might be neither.


Progressive Web Apps (PWAs) is a term – first used in 2015 – to describe the combined use of modern technologies, design concepts, and Web APIs to provide an app-like experience on the mobile web. More importantly, they are device-agnostic, and run inside modern web browsers, with no need to first download anything from an app store.

Obviously, there is a lot more to Progressive Web Apps that can’t be covered in a simplified summary, so read on to become more familiar with a term you’ll be encountering a lot more in the coming months.

Despite being a relatively new development, many large brands have already started implementing Progressive Web Apps, and some have already attributed amazing results to their PWAs.

The Twitter Lite Progressive Web App became the default mobile browser experience for all users in April 2017. The benefit to Twitter included: 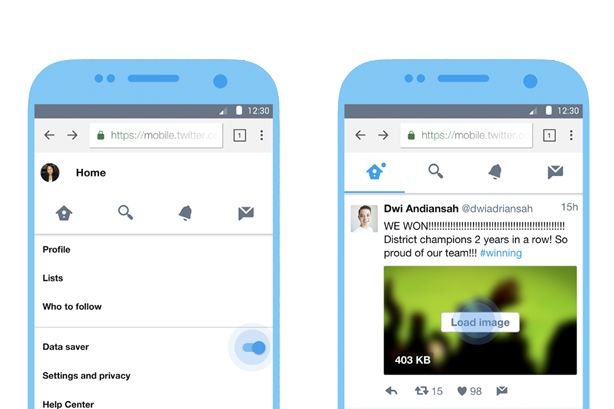 While users benefited from an experience that used less than 3% of the device storage space compared with the Android native app and more impressively helped reduce data consumption by as much as 70%. And when you’re browsing using mobile data as opposed to WiFi, this is significant. The reduced data consumption also opens up the Twitter experience to those on slower connections, which really matters when 45% of connections still use 2G.

Mobile commerce is growing three times faster than e-commerce, but AliExpress had trouble creating a mobile web experience that was as fast as their mobile app, while Lancôme had trouble converting on mobile. Both brands addressed this by creating a PWA, and

Both brands addressed this by creating a PWA, and AliExpress saw: 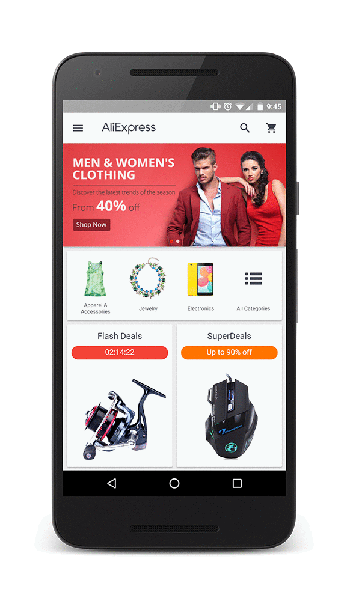 Progressive Web Apps aren’t limited only to social networks and e-commerce sites, as demonstrated by Forbes, who replaced their mobile site with a PWA enabled site, leading to:

So where did progressive web apps come from?

Before dissecting Progressive Web Apps, we have to first revisit web apps – without the modifier. The earliest websites, like much of the web in the early 90s, weren’t terribly dynamic or interactive. They also weren’t that common, with the limitations of CGI curtailing wide-scale adoption.

The introduction of scripting languages and frameworks such as ASP, ColdFusion, and PHP helped move things forward, but it was only following the common adoption of Ajax that web applications started to become truly dynamic. The use of Ajax made it easier to create asynchronous websites that were capable of sending data to, and retrieving data from, a web server in the background. Websites using Ajax were able to update and change content on a page dynamically, without having to reload the page at all.

Early adopters of Ajax included Google – in the first releases of Gmail and Maps – and Kayak.

But this leap forward was not entirely flawless. The shortcomings of Ajax included…

There were workarounds for these problems, but they often ended up making the code of the web technology even more complex…

Without Ajax we might have been spared the Web 2.0 label that also entered popular use in 2004. But we would probably have had to wait longer for many of the web apps we now use daily without even thinking of them as web apps: YouTube, Facebook, Twitter, almost anything Google, Evernote, Dropbox, and more.

But the arrival of smartphone operating systems (iOS, Android, and very briefly Windows Phone) complicated things. Each of the web apps listed above, and many others not mentioned here, now also have a mobile app counterpart. And while larger brands such as Google and Facebook have the resources to manage continued development of web apps in addition to an iOS and Android app, the same can’t be said for new startups, SMBs, and independent developers. 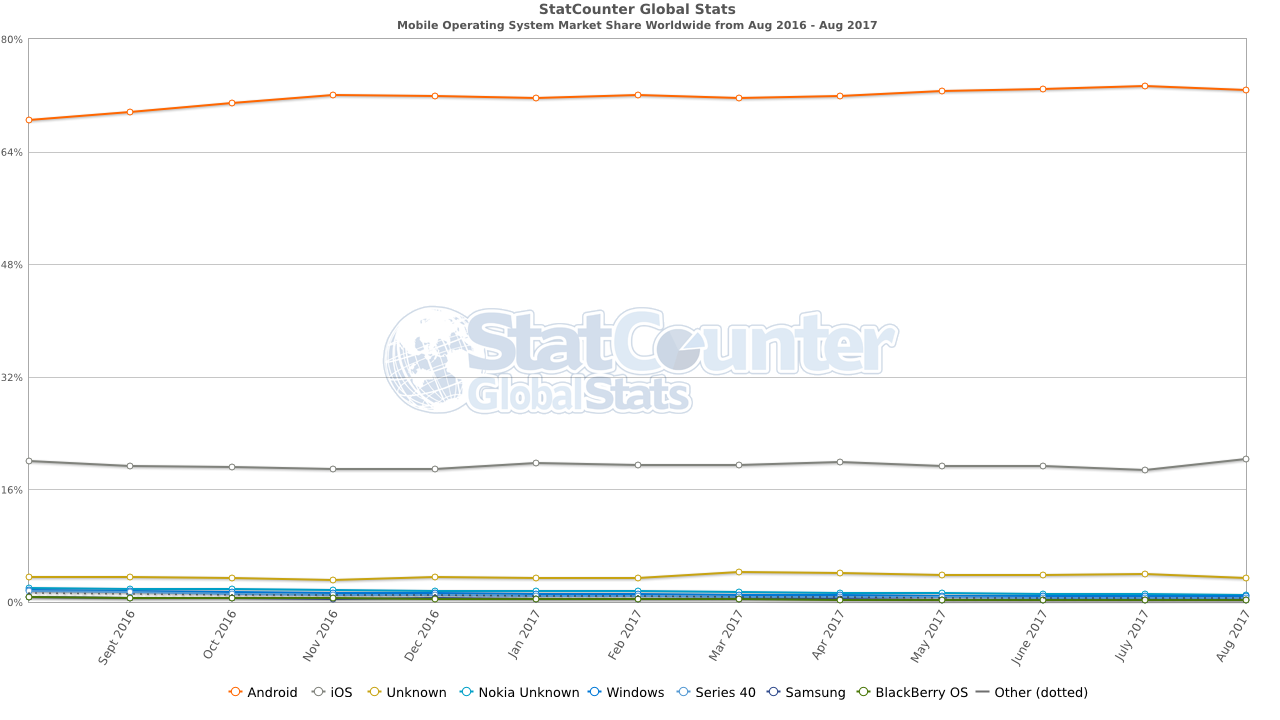 Favouring one smartphone OS over another was once feasible, but now, even though Android’s global market share far exceeds that of iOS, iOS still leads in certain key regions. Meaning if you are developing an app that you want to succeed in almost all markets, you have little choice but to develop for both Android and iOS. Which finally brings us to progressive web apps.

How are Progressive Web Apps different?

The biggest difference, initially, was that native apps – apps designed specifically for iOS and Android – offered a better user-experience. They could be accessed faster, and performance overall was smoother than that offered by a web app on a mobile device. Many native apps could still be used even with no internet connection, could still update information even when running in the background, and – with proper use of push notifications – could have higher engagement rates.

Continued development of CSS3 and JavaScript, the finalisation of HTML5, along with more powerful browsers and processors paved the way for hybrid apps, leading ultimately to Progressive Web Apps. First introduced by Frances Berriman and Alex Russell in a 2015 blog post, Progressive Web Apps differ from native, hybrid, and regular web apps in that:

To be fair, Berriman and Russel were giving a name to something that already existed, but they took it further a year later by setting forth some baseline criteria for web apps in order for them to be considered Progressive Web Apps.

There are several reasons for Progressive Web Apps being so awesome that they are being talked about so much that they risk becoming an annoying buzzword. These include:

Expanding on these further,  the key characteristics of PWAs – over and above the baseline criteria – are that they should be:

The Tech Behind Progressive Web Apps

As noted earlier, PWAs are mostly standard HTML5, CSS3, and JavaScript. Two technologies that combine with this to ‘create’ a PWA are web app manifests and service workers.

A web app manifest is a simple JSON file that controls how the app appears to users on a mobile device, directs what the user can launch, and defines the app appearance at launch. Some of the things you can control include:

The web app manifest is also used by Chrome to determine whether or not to display a Web App Install Banner, and is referenced in your HTML through the following addition

It is a script file that runs independently of your web site, and it is this file that allows your app to work even when not connected to the internet, while also controlling background sync. It is also used for push notifications, and will also control future PWA features such as geofencing, etc. PWAs are able to work offline because one of the functions of service workers is to automatically cache assets specified by you. And remembering how one of Google’s baseline criteria for a PWA is that it is served over TLS, service workers can only be registered on sites served securely.

Google has developed an open-source tool for auditing the performance and quality of any web page, including Progressive Web Apps. While it is a great tool to audit any website, it is especially useful if you decide to adapt your website as a Progressive Web App. As highlighted earlier in this article, there are certain criteria that need to be met in order for a website to be recognised as a PWA, but overall performance is especially important since PWAs are intended for users on a mobile device. However, don’t focus only meeting the criteria and passing the Lighthouse audit, because in doing so there is always the risk that you ignore user-experience.

The biggest disadvantage of PWAs is that they aren’t currently supported by all mobile browsers. Google’s baseline criteria does state “a site must work cross-browser” (emphasis added), and since much of the PWA is developed using standard HTML5, etc. they will. What is currently lacking in Safari and Microsoft Edge is support for service workers. Service workers aren’t needed for the site to operate properly, only for the app-like features. 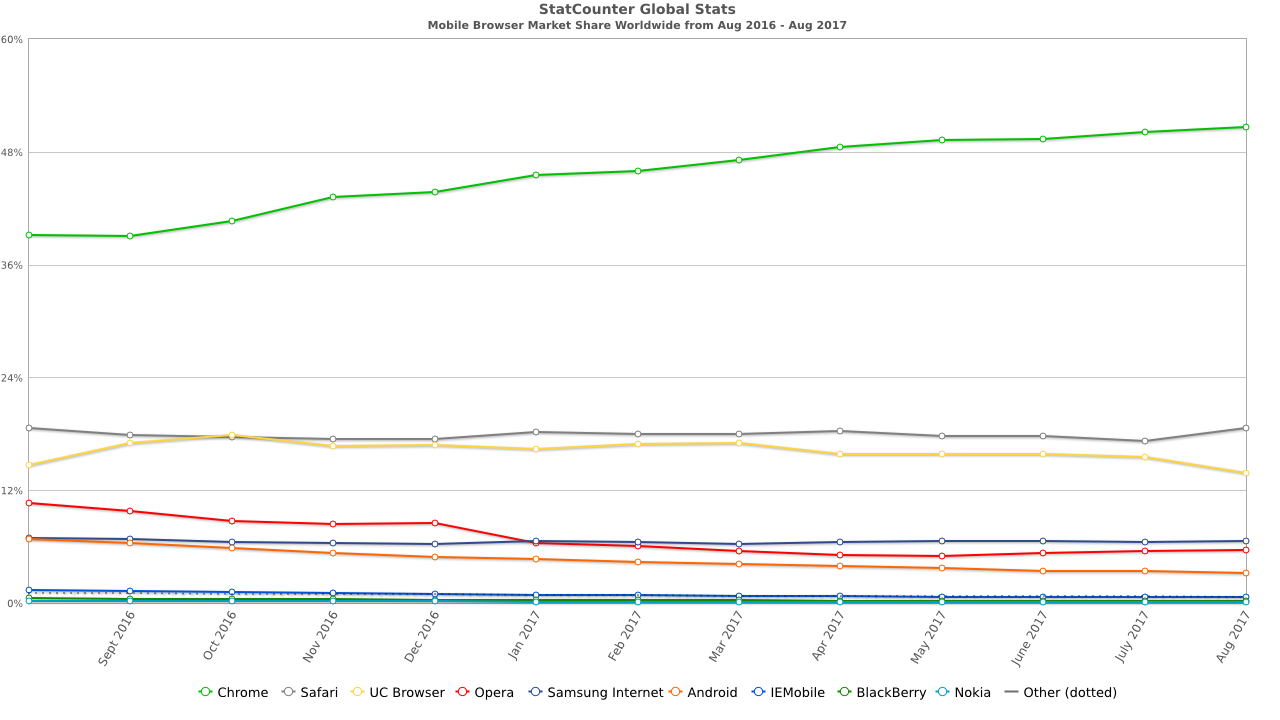 But since Chrome dominates in almost all markets, this shouldn’t be a deterrent from investing in a PWA now. Support for service workers is in development for Microsoft Edge, and has now also shown up in WebKit, although this doesn’t guarantee that it will be supported by Safari Mobile anytime soon.

Additionally, service workers currently only support push notifications and background sync, with features found in many business related apps – like geofencing – notably absent. However, this too should not be a deterrent since PWAs are still relatively new, but with Google supporting and hyping them, we can expect to see lots of features common to native apps being added in the near future. And hopefully, this will also include the ability to access system features, and the ability to interact with other PWAs.

It should be noted that Google is already automatically adding an Android wrapper to some PWAs, meaning that on Android devices they can show up in the Apps screen. Similarly, Microsoft is also testing adding a Windows wrapper to some PWAs. These apps are then added to the Windows Store, and appear as apps in Bing search results. Meaning that Google and Microsoft are already seeing PWAs as being equal to native apps. In a recent blog post, Berriman responded to criticism over the term Progressive Web Apps, and he ends off by reminding us that (emphasis added):

PWAs are just a bunch of technologies with a zingy-new brand name that keeps the open web going a bit longer, that helps it compete with the proprietary, the closed, until the next thing (and hopefully the next thing) comes along to keep it sharp and relevant. It’s for the next billion users who come online and open a browser and go looking for what’s out there, for those users who have to pay per mb for their downloads, who have old phones, who don’t want to, or can’t, be on a native-app-based operating system.

Progressive Web Apps are – for want of a better phrase – a new technology, but one that has already demonstrated incredible benefits, not least of which is the lower development cost compared to native apps. Reaching your full audience with a native app requires developing two apps, one for iOS and one for Android. Add to that the cost of ongoing maintenance to ensure it works with each new OS version, along with some backward compatibility for users with an older OS. With a PWA you only develop or adapt a single version of your website/web app: users with a browser that doesn’t fully support PWAs can still access your site, they just won’t get the full app-like experience. And as shown by the real-world examples above, there are almost immediate benefits for both you as a business owner, and for your audience.

8 thoughts on “What Is a Progressive Web App? a Beginners Guide to PWAs”