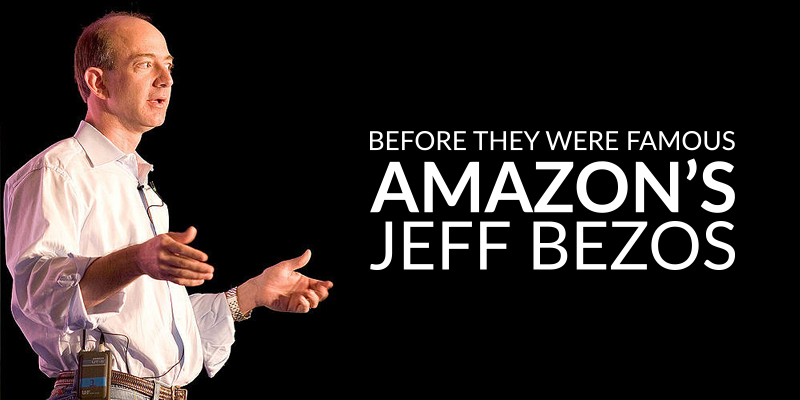 Ever since Amazon launched in 1995, not a year has passed without Jeff Bezos being mentioned in news articles a few dozen times. But 2018/2019 was a little different, with the number of mentions exploding both as a result of Bezos being named the richest man in modern history, and he and his wife of 25 years, MacKenzie Tuttle, announcing their intent to divorce.

But AppInstitute is about apps, so this article will look at how Bezos got started on his path to becoming the richest man in modern history: from giving up a promising and lucrative career in finance to follow a dream based on a half-formed idea, and a handwritten business plan. A dream that involved creating an “everything store”, but started out with only selling books, and ended up influencing e-commerce, our reading habits, and even the app industry – both web and mobile.

Jeffrey Preston Jorgensen was born in Albuquerque, New Mexico, the son of Jacklyn Gise Jorgensen and Ted Jorgensen. Jeffrey’s parents divorced after less than a year of marriage, and it was only after his mother married Cuban immigrant Miguel “Mike” Bezos in 1968 that he became known as Jeffrey Preston Bezos. Through until the end of elementary school Jeff and his family lived in Houston, Texas, before moving to Miami, Florida. Jeff appears to have been a model student at high school, working the breakfast shift at McDonald’s, and still managing to be high school valedictorian, a National Merit Scholar, and winning the Silver Knight Award for science.

From an early age Bezos exhibited a natural curiosity for understanding how things work, which later translated into an interest in computers. But while he would eventually graduate from Princeton University with a Bachelor of Science in computer science and electrical engineering, his first choice had been to study physics. Bezos also had an entrepreneurial spirit, starting the Dream Institute – an educational summer camp for fourth, fifth and sixth graders – while still in high school.

Curiously, despite holding a Bachelor of Science, his career initially saw him working in finance. His first job in 1996 was a little aligned with what he had studied and saw him helping build a network for international trade for Fitel, a financial telecommunications start-up. He then worked as a product manager for Bankers Trust for two years, before joining a newly founded hedge fund – D. E. Shaw & Co – in 1990. His time at D. E. Shaw & Co was undeniably productive: not only did he become senior vice-president of the company, he also met and married MacKenzie Tuttle.

Perhaps for Jeff Bezos it might be more accurate to label this “The Internet Entrepreneur Emerges”. Although personal digital assistants (PDAs) had started to make an appearance, the iPhone was still more than a decade away. PDAs were also marketed as enterprise devices, but the internet was starting to make its way into more and more homes. So Jeffrey Preston Bezos begins playing around with the idea of starting an online store that sells everything. But he accepts having to start with selling one thing, so he draws up a list of twenty things he could sell, eventually settling on books. Against the advice of his boss and his parents, Bezos resigns, and drives from New York to Seattle with his wife and ideas, drawing up his initial business plan along the way.

Cadabra Inc. is established in July 1994, with Bezos, his wife, and two programmers working out of his garage. His lawyer eventually convinces him to change the name, since it is felt that Cadabra sounds too similar to cadaver, and while Bezos initially favoured Relentless – type relentless.com into your browser and see where you end up – he settled on Amazon because of the use of the first letter of the alphabet, and because the Amazon is the largest river in the world. Amazon launches in July 1995 – without any inventory. Books were ordered from distributors only after a customer had made a purchase on the Amazon website, but there was a small problem with this system in that book distributors expected a minimum of ten books to be ordered at a time. Amazon seldom needed this many books in the beginning, but they were quick to identify a loophole: the distributors didn’t require that all ten books be the same title, and they didn’t stipulate that all ten books had to be shipped at the same time. So the team would order one or two titles that they needed, and the balance of the order would be for out-of-print titles that – the team hoped – wouldn’t ship.

Without getting into a debate about the ethics of this hack, it did allow Bezos and his small team to focus using the $1M he raised through angel investors and family to rapidly grow the business without worrying about slow moving inventory and warehouse space. Two years after Amazon launched it went public with an IPO in 1997, and in 1998 the company began diversifying its catalogue, first adding CDs and videos, with many more products and categories following over the last twenty years. None of this, however, should suggest that Amazon was successful at first. At least not in terms of turning a profit. The emphasis was on growth and revenue, with the first quarterly profit only being reported in the last quarter of 2001.

But an emphasis on future growth and revenue does make it more difficult to attract investment, while also encouraging a little bit of recklessness. Over the years Bezos and his company have ventured into a variety of different fields, mostly related to online commerce in some way, but not all of them were successful.

[bctt tweet=”Experiments are by their very nature prone to failure. But a few big successes compensate for dozens and dozens of things that didn’t work. ~ Jeff Bezos”]

Some, like Amazon Auctions and zShops, were spectacular failures, but these also provided lessons and a foundation for the Amazon Marketplace. Others, like askville.com, weren’t necessarily failures, but they aren’t around any longer because they no longer serve a purpose. 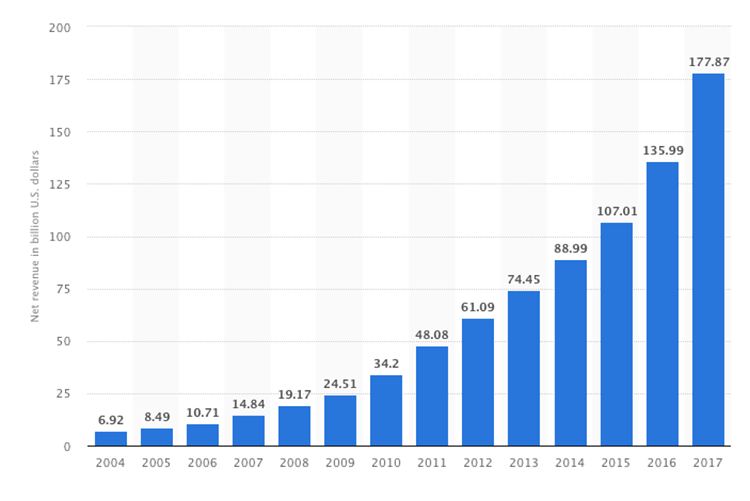 Amazon itself was almost a failure, with revenues stagnating right after a bit of aggressive spending – in the middle of the infamous dot-com crash. Bezos shored up the company’s low cash balances with $2B borrowed from banks, and tried to cut expenses by closing distribution centres, and reducing the Amazon workforce by around 14 percent. It would be great to say that after this there was more focus on successful operations and less on experimentation, and maybe there was a bit more structure, but the drive for innovation certainly didn’t die. Amazon Web Services (AWS was first launched in 2002 but was little more than a few – almost random – tools and services. But opportunities to change this were quickly identified, and the AWS that has grown to contribute more than $17B in annual revenue to Amazon’s overall revenue of $177B was relaunched in 2006.

“There are two ways to extend a business. Take inventory of what you’re good at and extend out from your skills. Or determine what your customers need and work backward, even if it requires learning new skills. Kindle is an example of working backward.” ~ Jeff Bezos

A year after the relaunch of AWS, Amazon launched the Kindle; it wasn’t the first commercial e-reader to market, but it was the first successful e-reader, selling out almost immediately, and with a global market share of 53 percent as of 2015. Since the Kindle, Amazon’s range of in-house developed electronic devices has grown to include Fire Tablets, Fire TV, and the Amazon Echo, and with a growing interest in home automation, more will probably follow.

Unlike other entrepreneurs we have profiled, hearing the name Jeff Bezos doesn’t make you immediately think of any groundbreaking apps. Naturally Amazon has developed and launched a number of apps related to Amazon’s various products, services, and subsidiaries, but few of these are revolutionary in anyway or a must-have on your smartphone. Which begs the question, why profile Jeff Bezos at all?

“What we need to do is always lean into the future; when the world changes around you and when it changes against you – what used to be a tail wind is now a head wind – you have to lean into that and figure out what to do because complaining isn’t a strategy.” ~ Jeff Bezos

The answer lies in the fact that under the leadership of Jeff Bezos, Amazon has helped shape e-commerce, including simpler checkout, faster delivery, and methods for aiding in product discovery that are now seen in countless numbers of online stores and e-commerce apps. The A9 subsidiary continues to explore ways of improving product search and advertising, including ways of enhancing visual search.

And of course, the biggest link to apps is found in Amazon Web Services (AWS). AWS isn’t a single service, but rather a comprehensive suite of more than 100 services ranging from storage to databases and computing. AWS saves start-ups and app developers from the hassle of having to set up – and scale – server farms to handle traffic and the processing and storage of data. And AWS isn’t used only by start-ups and small-scale app developers, with popular mobile apps and web services such as Netflix, Slack, AirBnB, and Trainline all relying on AWS for some aspect of their app’s success.

On his way to becoming the richest man in modern history, Jeff Bezos has certainly made a few enemies, both personally and as the head of Amazon. Over the years Amazon has been blamed for contributing to the decline of malls in the US, and even accused of destabilising the publishing industry. But he hasn’t allowed it to detract him from achieving what he set out to achieve: an “everything store”. Amazon today is not quite an “everything store”, but it is as close as you can probably get. And what isn’t always noticed is that Amazon today is also helping many other businesses succeed, from those using AWS through to small entrepreneurs using the Amazon Marketplace to reach a much wider audience than they could by launching their own online store. Amazon’s success is as much dependant on innovation and providing access to an ever-growing catalogue of products and services, as it is in helping other businesses succeed.

App Builders Before They Were Famous: Amazon’s Jeff Bezos

0 thoughts on “App Builders Before They Were Famous: Amazon’s Jeff Bezos”