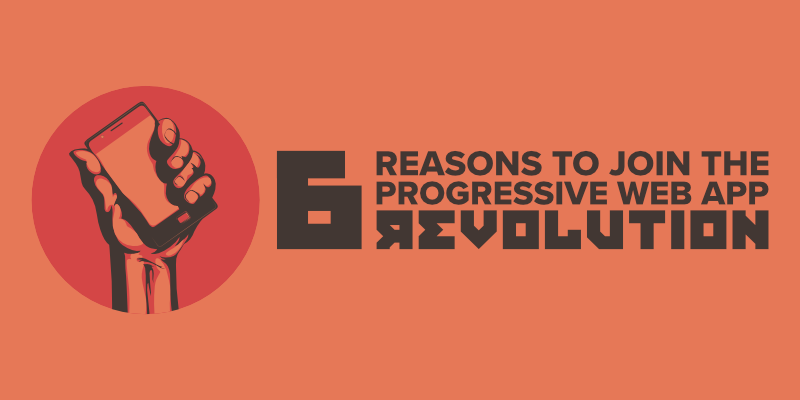 So the website for your business is sleek, modern and effective. You might also be seeing a genuine return on your investment, having published a native app- and that’s great. So if you’ve heard anything about Progressive Web Apps, you might be thinking… What’s the point? Why not stick while you’re ahead since if it isn’t broke, you don’t have to fix it?

Well, we can’t tell you what to do. But here are a few real reasons, and a couple of wow factors, which we think will change your mind. Starting with…

Having an effective native app is an essential, and we aren’t arguing that. But have you been on the app store lately? Smartphone users are paralysed for choice when it comes to choosing apps and games to download to their device because there are just so many. And it’s really hard to cut through that noise and reach users, even those who are pretty much ready and waiting for whatever it is you have to offer!

That’s one advantage that websites do have over native apps. Every website is indexable by Google and other search tools so that when somebody searches for fresh grapefruit juice in Greenland, that’s exactly what they’ll find. Searching for native apps isn’t anywhere near as easy.

But that’s just what Progressive Web Apps offer: the responsiveness of a native app- which is a point we’ll return to in a moment- combined with great discoverability. And since it’s online, you can even run a paid advertising campaign to drive users to your PWA. Perfect!

Creating a native app is almost always a good choice, but there are overheads that are associated with it. First things first, you have to have one actually coded for you; in fairness, the same applies to a progressive web app, but the cost of a native app is far more, with the most complex even pushing north of $1 million. And that’s without considering the costs of a back-end server if your app requires one.

With a PWA, you get the feeling of an app without the friction. Users don’t ever have to leave their mobile browser to access your PWA. But a progressive web app is completely free from the large data requirements of a native app install, and not only that, the design itself will cost less.

Your app is a great tool for converting users into profit, but it isn’t perfect. And as we’ve said, neither is your website as it stands now. We’re sure that your site is fantastically put together, and that it offers that awesome mobile experience without the need for something like a native app or a PWA. But we’re also sure that it has its limits.

The first thing? Speed is a huge factor. A responsive website is just the reworked version of your desktop website. So while it might load quickly, that doesn’t mean that the user will find the quickest way to interact with or navigate through your site. You can always use something like AMP, but you’ll be let down by the aesthetics.

When a user comes across your PWA, they’ll think two things: first, that the clearly bespoke site they’ve arrived at looks good. But second, that it works great too. PWAs are easy to navigate and use, and that only means one thing: users are far more likely to convert.

The next great thing about PWAs is that they’re completely cross-platform. They aren’t restricted to more powerful devices like the latest iPhone or Android smartphones, nor are they restricted to a smartphone as opposed to tablet. Since PWAs are being pushed hard by Google at the moment, you might think that there’s something that restricts them to the Chrome browser, but that’s not the case either. PWAs work with code that can run on any device, and in any modern browser.

This means that you give up none of the cross-platform functionality of your regular mobile site, so you’re not restricting your audience: you’re expanding it.

They don’t wait around…

Alright, fine, we’ve already mentioned how quickly PWAs can load. But to really get the best effects, have you thought about combining your PWA with AMP- for the uninitiated, AMP being Accelerated Mobile Pages, one of Google’s latest offerings in mobile search. Pages load almost instantly, and that’s regardless of your internet connection.

The power of being able to load your site or your post even without a stable connection is huge. Why’s that? Because it means that the mobile web can finally offer the same functionality as a native app, in that it works wherever you are, no matter how many bars you’re getting. This makes PWAs a great tool for reaching out to an audience that might not necessarily have the fastest internet connections – but do have mobiles.

…And they save your time, too.

Just like the users visiting your website don’t always have a lot of time, neither do you. We all struggle to find more hours in the day. But the good news is that a PWA will help save you time, and not just because it loads faster than a regular site.

If you have any personal experience working with apps for either iPhone or Android, you’ll know how much of a pain they can be to update! Updating your PWA is a cake walk in comparison because you get to avoid the hassle of submitting your work to the app store time and time again. That means you can update your PWA at your own convenience!