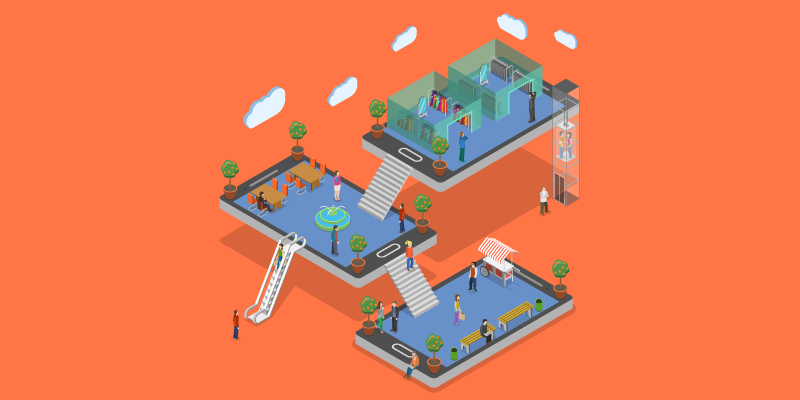 Yes! You’ve finally done it: there’s a branded app with your name on it available for download on both the Apple and Google Play app stores. Breathe in this moment, inhale your effort and then exhale your success. Now, let’s go check out how many people are downloading this gem of commerce that you’ve released to the world: there’s one download. Wait, that’s you. Oh, but there’s the second. And the third. Still the third. The third is holding on for quite awhile. Why does it still say three? Really, just three? Let’s not obsess. We’ll check in later.

Well, there’s the simple fact that you’re one of the more than 2 million apps on each of these stores. You’re going to have to do a little more to get noticed. Especially if you’re a small, local business, just publishing your app with a nice description loaded with keywords isn’t going to be enough to get you noticed. In fact, you’ll probably never get the kind of front page status large companies are going get. If you’re going to get your app onto your customers’ devices, you’ll need to take matters into your own hands.

To do this, you’re going to need to market to, and incentivise, the people who are already your customers. While an app is a good way to attract new customers, initial marketing efforts need to employ a focused customer retention strategy; if your app isn’t appreciated by people who already appreciate you, it’s certainly not going to attract people who’ve never done business with you before.

So what kinds of things convince people to download a retail app? The website emarketer.com reports on a survey that answers exactly that question, and the top four answers are instructive for anyone looking for ways to get more downloads. Here they are, in countdown form, from least to most popular reasons:

59% of the people responding to this survey cited this as a reason: they already purchase from this business frequently. Why this is has to do with the ease of ordering a mobile app provides. With all your billing and shipping information saved, ordering becomes a matter of a few screen taps.  It’s fast and easy, and if they were going buy something from you anyway, why not do it as easily possible?

Knowing this only reinforces the central thesis of this post: that your most likely downloads are going to come from people who already do business with you. But you should also understand the fact that they’re already a fairly loyal customer is only enough to get less than six out of ten people to download your app. That means that the more popular reasons, the ones that really drive downloads, have less to do with loyalty to your brand. They’re more about incentives—the old “What’s in it for me?” line of thinking. Which should be enough to get you thinking about how you can make it worth people’s while to download.

#3. Receive a discount on their first order.

Offering an incentive to download is pretty much mandatory if you’ve got any hopes of your app doing its job. Think about it from the customer’s perspective. You’re basically saying, “Hey, you know how you come to my store every so often and buy some things? I was thinking it would be cool if you could keep buying things even when you’re not here.” That’s a pretty big ask.

Besides, by offering a discount on their first purchase, you’re not just giving them an incentive to download the app, you’re giving them a reason to make another purchase, which is the whole point of the app.

In practice, it shouldn’t matter to your customers whether the discounts they receive are also available in the store, or to other customers who don’t have the app. A discount is a discount. But it doesn’t quite work that way for the 67% of people who cited this as their reason for downloading an app.

Humans are emotional creatures, and creating a sense of exclusivity increases the perceived value of the discount. Store-wide sales save people money, but exclusive offers mean they save more than other people did. And if they’re regularly spending money at your business, they’re not going to want to miss out on any deals.

This was the most cited reason people gave for downloading a retail app—71% of the survey respondents gave this answer. That popularity makes sense, since it comprises elements of each of the other three reasons. Loyalty participants are regular shoppers, bonus points are a form of financial incentive, and rewards programs have a sense of exclusivity around them.

By offering extra points for downloading (or maybe even for every mobile purchase), you nurture those already-established long-term customer relationships. That’s important: the other two incentives on this list are basically one-and-done propositions. There can only be one first purchase with an app. And while exclusive offers through the app may be recurring, they could ultimately incentivise customers to shop only when sales are happening. With loyalty programs, you lay the groundwork for repeat business, encouraging shoppers to keep buying well after the first download.

0 thoughts on “Four Reasons Shoppers Will Download Your App”